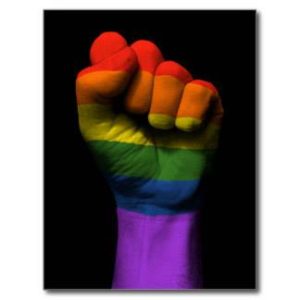 Yesterday the Tangerine Tyrant rescinded an executive order issued by President Barack Obama allowing transgendered youth to use the school bathroom for the gender with which they identified saying that in his opinion such decisions should be left to the states. We all know how well that worked out for North Carolina.

This decision is but the latest in an array of executive orders which have shown the depth of hate and discrimination harbored by this president and his party. One might say, “what would you expect from a president who is surrounded by advisors like Kellyanne Conway, Steven Miller, and Breitbart executive Steve Bannon?” But let’s not make excuses. This man obviously has no moral compass and completely lacks any depth of understanding of human nature and sex and gender. Perhaps this is due to his tiny hands or perhaps to his lack of intellect.

Anyone who is familiar with transgender issues will tell you that in the fight for equality for transgender folks, bathroom use is the biggest hot button topic. Fear and ignorance lie at the center of the controversy.

Most people just don’t get it that gender is not as simple as “male” and “female.” I am not a sexologist. I am not a trained clinician. But I do have some real life experience with the law and the transgendered community. I am going to delve into some sensitive areas here and while I may not get it all entirely correct, I’m going to do my best. My apologies if I step on any toes or if I oversimplify matters.

Gender needs to be thought of in two ways: 1) the gender one was born with based on the observed genitalia; and, 2) gender identity, i.e., that with which an individual most closely identifies regardless of genitalia. These two do not necessarily or always coincide.

Over the years we have seen great strides in recognizing that divergence between gender and gender identity in some individuals. Today, the Veterans Administration offers gender reassignment surgery as do many prisons and healthcare providers. But it is still not clear as to who gets to pee where and it remains the last frontier among the transgender community.

As an attorney with 35 years of practice, much of it in the area of employment discrimination and civil rights litigation, I have represented clients from every walk of life, sexual orientation, race, ethnicity, and gender. Several years ago I was called upon to represent a transgendered woman, male-to-female (MTF for short).

At the time of my representation of her she had completed everything but the sexual reassignment surgery (i.e., she still had mail genitalia) but you would never know it from her overall outward appearance–she was knocked out gorgeous.

Terri was a businesswoman who traveled for her work, frequenting Southern California where she would stay in high-end hotel. Terri frequently stayed in a very posh hotel in Santa Barbara. Terri had stayed there for several years, including times when she was living as a man, appearing as a man, and wearing man’s clothing.

But on this day, well into her transition as a woman, Terri checked into her posh hotel, appearing as and dressed as a very elegant woman. She presented her California drivers license to the hotel desk clerk which identified her as female. The desk clerk checked her into her room and after settling in she went downstairs to the hotel bar where she had a few drinks and conversed with other hotel guests. After a couple of drinks, she excused herself to the ladies room. When she emerged, she was set upon by 2 hotel security guards who beat her up and had her arrest for using the women’s restroom.

During her representation we enlisted the assistance of the American Civil Liberties Union, Lambda Legal Defense, the Asian Law Caucus, and other progressive organizations all of whom filed friends of the court briefs on her behalf. Nonetheless, she lost her case both in the trial court and in the Court of Appeals.

Don’t ever let anyone tell you that bathroom issues and transgender issues are easy or that the choice of bathroom is a slamdunk. The truth of the matter is that you would most likely never know that a transgendered person was using the bathroom with you. Requiring people to use the bathroom according to the sex they were born with will require men who look like women and women who look like men to use the restroom with people don’t look like them. It will do nothing more than create chaos, harassment, hate, and lead to increased discrimination and dysfunction.

These laws do nothing to create a more just society. We must do what we can to combat the ignorance, the fear and the stigma these misguided laws and lawmakers attempt to foist upon society. We must be kinder and gentler than that.