“Everybody talks about the weather, but nobody does anything about it.” — Mark Twain (or Charles Dudley Warner. We’re not quite sure.) 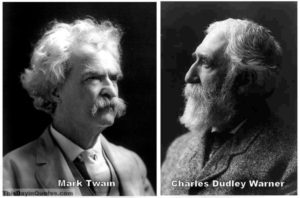 It turns out the same thing is true when it comes to big money and politics. Just look at the Democratic National Committee and its actions of just this morning.

Earlier this morning at the DNC, Democrats voted down a measure that would have reinstituted a ban on corporate lobbyists donating to the DNC. The measure was instituted by former President Barack Obama but quietly lifted by former DNC chairwoman Debbie Wasserman Schultz ahead of Hillary Clinton’s presidential run.

After spirited debate, Democrats decided against reinstituting the ban. They feared it would limit donations from liberal activist groups at a time when the party is in the throes of a massive rebuilding projects.

Those who wanted to see the ban reinstituted argued that it was a symbolic measure to say to the nation that Democrats would not compromise their values.

The United States Supreme Court opened the floodgates to corporate contributions to political campaigns with its decision in Citizens United v. Federal Election Commission 558 U.S. 310 (2010) in which the Supreme Court held (5–4) on 21 January 2010 that freedom of speech prohibited the government from restricting independent political expenditures by a nonprofit corporation. Big corporate money flooded political campaigns with little accountability.  The principles articulated by the Supreme Court in the case have also been extended to for-profit corporations, labor unions and other associations.

Ever since then, liberals and progressives alike have called for the reversal of that decision, making it a linchpin for their fund raising efforts. Unfortunately, fundraising efforts will not overturn a Supreme Court decision. While it might assist with efforts lobbying Congress for a change in the law such efforts are unlikely to have any practical effect. Members of Congress are deeply in the pockets of the money. It is little wonder they have no interest in changing the current structure or in enacting laws that would circumvent the court’s holding in Citizens United.

Big money in politics is a lot like the weather, everybody talks about it, but nobody does anything about it.