“Well, we’re giving a little more to X [the Republican], naturally, ’cause he’s got a better chance of winning. But we’ve given a lot to Y [the Democrat], too. In fact, I think we may be his biggest single bloc of support.”

The ratchet is a simple, ubiquitous, ancient bit of machinery. There’s one in your bicycle wheel (it allows you to coast without pedaling), there’s one in your watch (if you’re the old-fashioned type and have a mechanical watch) and there’s one in the jib sheet winches of your boat (if you’re a yachtsman; but then in that case you probably aren’t reading this book). What the ratchet does is permit rotation in one direction but not in the other. Here’s a diagram: 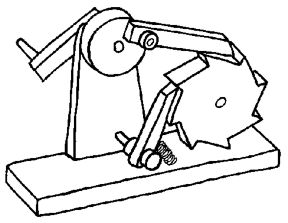 The American political system, since at least 1968, has been operating like a ratchet, and both parties — Republicans and Democrats — play crucial, mutually reinforcing roles in its operation.

The electoral ratchet permits movement only in the rightward direction. The Republican role is fairly clear; the Republicans apply the torque that rotates the thing rightward.

The Democrats’ role is a little less obvious. The Democrats are the pawl. They don’t resist the rightward movement — they let it happen — but whenever the rightward force slackens momentarily, for whatever reason, the Democrats click into place and keep the machine from rotating back to the left.

Here’s how it works. In every election year, the Democrats come and tell us that the country has moved to the right, and so the Democratic Party has to move right too in the name of realism and electability. Gotta keep these right-wing madmen out of the White House, no matter what it takes.

So now the Democrats have moved to the “center.” But of course this has the effect of shifting the “center” farther to the right.

Now, as a consequence, the Republicans suddenly don’t seem so crazy anymore — they’re closer to the center, through no effort of their own, because the center has shifted closer to them. So they can move even further right, and still end up no farther from the “center” than they were four years ago.

In fact, the Democrats’ rightward shift not only enables the Republicans to move farther right themselves; it actually compels them to do so, if they want to maintain their identity as the angry-white-guy party par excellence. (A great part of the Republicans’ hysterical hatred of Bill Clinton arose from this cause: with Democrats like Clinton, who needs Republicans?)

Has the phrase “conspiracy theory” crept into your mind yet? Let me exorcize it. This is not a vast conspiracy. Nobody planned it out. What I am offering here is a structural explanation, not a conspiracy theory. There is a very important difference. Perhaps an analogy will help.

I assume that most people reading this book believe in the Darwinian theory of evolution. We often speak of the “function” or “purpose” of anatomical structures — like your liver, or your thumb, or the hammerhead shark’s odd cranium. But this way of talking doesn’t commit us to believing that somebody planned these structures out. They were not contrived; they evolved.

The same holds true for the rightward ratchet in contemporary American politics. No Machiavelli schemed it into existence; it evolved. And it evolved for the same reason that anything evolves: it was useful. But useful to whom?

Not useful, certainly, to the millions of slightly, or more-than-slightly, left-of-center Americans who troop glumly to the polls every four years, hold their noses, and vote for the “lesser evil,” even though they expect nothing from their candidate. Nor is it useful to the forty to fifty percent of Americans who don’t bother to vote at all because neither candidate has managed to say anything that seems relevant to their lives,

I have a somewhat unlikely friend, a rich man in Chicago — let’s call him Al. Politics is not Al’s profession, or even his first interest in life, but he is a well-connected, intelligent guy who has some pet political causes. I happened to ask him one year, during a Senatorial campaign, which candidate he and his friends were contributing to. Both candidates were quite friendly to his cause, and I thought he might have had a hard time deciding between them. Al looked at me as if I had just revealed unsuspected depths of idiocy. “Both, of course,” he replied.

“Well, we’re giving a little more to X [the Republican], naturally, ’cause he’s got a better chance of winning. But we’ve given a lot to Y [the Democrat], too. In fact, I think we may be his biggest single bloc of support.”

The ratchet works really well for people like Al: and that’s what keeps it in operation. It’s not that he’s an especially right-wing guy himself; in fact, he thinks of himself as a liberal. But the ratchet has lowered his taxes, gotten the unions out of his plant, fattened the budget of his wealthy suburban school district (and correspondingly starved the urban districts where his employees live). He thinks Bush is a contemptible idiot, and may even have voted for Kerry himself (though he’s very reluctant to talk about it). But what’s beyond question is that the ratchet has operated to his benefit.

Absent some countervailing pressure from what we’ll call, for short, the Left, it’s a foregone conclusion that the political system will evolve in a way that responds to the desires of the wealthy and powerful.

Over time, the Democratic Party has assumed the role of ensuring that the countervailing pressure from the Left doesn’t happen. The party contains and neutralizes the Left, or what there is of it. Left voters are supposed to support the Democrat, come what may — and it’s amazing how many of us have internalized this supposed obligation — but they are not allowed to have any influence on the party’s policies, either during the campaign or during the Republicans’ infrequent holidays in opposition. Al’s employees mostly vote Democratic. They get nothing for their pains, but the Clinton years were as good for Al as the Reagan years.

But that’s not the worst of it. The reluctant-Democrat voters — like my neighbor Annie — don’t realize that their votes are not just wasted: they are positively helping drive the ratchet. The fact that these captive lefties can be counted on not to bolt enables the James Carvilles and the Al Froms and the other DLC “triangulators” to pursue their rightward course without fear of any consequences. Annie and all the other well-meaning dependable Democrats are supplying an essential part of the fuel that keeps the machine going.

Again: Nobody planned this. The Democratic Party fell into its role in the ratchet for historical reasons, which we will explore in the next chapter. But now that the machine is up and running and delivering the goods for the wealthy and powerful, there is certainly no reason for the wealthy and powerful to interfere with it. And there is no means by which the less wealthy, whose power is only in their numbers, can affect it at all — except by depriving it of their support.

Over the decades since the ratchet started operating, each party has developed a story, a narrative, or less politely, a scam, that depends crucially on predictable behavior by the other party. Those Republicans, say the Democrats, they’re crazy extremists; last year it was Iraq, next year it’ll be Iran. We have to stop them by any means necessary, even if it means wearing their clothes.

The Republicans reply: Where do you get off calling us crazy? You voted for the Iraq war. And you’re defending Iran now?

Oh no, say the Democrats, those Iranians, they’re terrible. Somebody really needs to do something about them. Why haven’t you guys done it?

At this point Annie gets upset and calls her Democratic congressman. “Ted! Are you advocating war with Iran?”

“Naaah, naah, Annie,” Ted coos, “That’s just to get our guy elected. Gotta keep those crazies out of the White House.”

Annie hangs up the phone, trying to feel reassured, and tomorrow’s New York Times will announce that war with Iran is a matter of bipartisan consensus.

The Democrats depend on the Republicans to frighten their constituencies and keep them in the Democratic corral. It’s not too strong to say that in effect, they encourage the Republicans to play the bad cop. The Republicans, conversely, need a bogeyman to energize their activist base — a Godless, urban, liberal bogeyman who will tempt good Christian boys into sodomitical vice and take away people’s guns. So far, the relationship between the party narratives is symmetrical: each is Bad Cop to the other’s Good Cop. But there are some crucial asymmetries, and it’s these asymmetries that drive the ratchet effect.

One of the most important asymmetries is that while the Republicans can be as ferocious as they please on matters relating to culture — sex, religion, and so on — the Democrats are not prepared to be ferocious on the only possible counterweight to culture, which is… class. In fact, not only are the Democrats unwilling to be ferocious, they’re unwilling to raise the topic at all. It’s the Great Unmentionable of American politics.

It was not always thus. Class politics was one of the pillars of the Democratic party of Roosevelt — the party that Annie is remembering when she pulls the donkey lever. How we got from there to here is the subject of the next chapter.