This has been a really sucky year–like I have to tell you.

If you ticked any box in the general election, other than Republican, (and maybe a few who ticked the Republican box but for other candidates in the primary) during the last month you have probably felt as though your head was about to explode. I know I have. I spent the first two and a half weeks after the inauguration being so angry and disheartened that day-to-day functions were difficult. Even my partner, who was a registered Republican when I met him, then became an independent and supported Bernie in the primary, was more affected than I could have ever imagined.

Fortunately or unfortunately, this is a president with regard to whom we do not need to use our imaginations to establish how bad he is, both as a person and as a president, even after four short weeks in office. Stories on the Internet about his tyrannies abound and they are easily believed. We are eager to read about his personal, familial, business and financial shortcomings and authors, reporters, and bloggers are more than willing to supply us ample fodder to stoke the fires of our anger.

But being angry without direction or purpose just consumes us just as a fire consumes the wood which is the fuel for its flame. Fire, put to good purpose, serves us well. The flame illuminates the night, warms our homes, changes iron to steel.

Here is a short list of my suggestions of ways to channel our anger and work to make a difference in this administration, and work toward taking back our government in the near future.

Living in liberal San Francisco, I used to think that communicating with my elected officials really didn’t matter. After all, they all shared my values and views on the world, right? Not at all! Just like anyone else, they needed to know what I thought, and not only what I thought but what my neighbors thought. So I started writing. I got on their email lists. I started getting updates about what they’re doing and the actions they are taking in Congress. Some of them I agree with, and some of them I don’t. When I agree, I send them heartfelt thank you, and when I don’t I tell them.

My partner and I have had some robust discussions after he has remarked about how lucky we are to live in such a liberal state is California. Virtually all of our elected Democratic officials are beholden to the establishment Democratic machine, and soon after being elected (if not before) are beholden to big money interests, in San Francisco especially to real estate developers.

A good friend of mine once scolded me for using the term neoliberal in referring to these politicians saying that most of them had their hearts in the right place. Unfortunately, for me their hearts are located too near their pocketbooks. I have never had much luck in love when it comes to politics.

I can tell you that on many days while watching Meet the Press Daily with Chuck Todd on MSNBC, a supposedly liberal media outlet, the dogs get up and leave the room because I’m yelling at television.

I have taken to recording Fox News Sundays with Chris Matthews just to see what the alt-right crowd is saying. Truly, if you want the hairs on the back of your neck stand on end, this is a show not to miss. 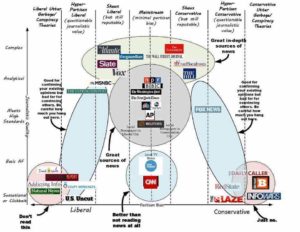 I am also considering an online subscription to the New York Times and to the Washington Post. A friend posted the graph at right illustrating the right versus left leanings of various outlets which I have found helpful. You may as well.

Look, it is not too early to begin working for change in the processes and people who led us to this place. So, I’m going to work for change in the process. I am going to vote for progressive, truly progressive, candidates. I will not support neoliberals or the political establishment or the corporate elites. I will work to get big money out of politics, but for now I simply just minimize the destruction caused by a madman in the White House.