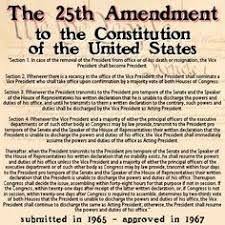 In the op-ed piece, the writer states:

Given the instability many witnessed, there were early whispers within the cabinet of invoking the 25th Amendment, which would start a complex process for removing the president. But no one wanted to precipitate a constitutional crisis. So we will do what we can to steer the administration in the right direction until — one way or another — it’s over. [emphasis added]

And so, for at least the third time during this presidency, the talking heads are spinning the likelihood of using the 25th Amendment to the Constitution to oust the sitting president.

I have blogged about the 25th Amendment on two previous occasions:

Succinctly, the 25th Amendment was enacted in 1967 following the death of President Kennedy. The purpose is:

Section 4 is what has grabbed everyone’s attention during this president’s brief term in office.

While section 4 may be appealing, it is not practical, nor does it have any realistic chance of being employed. Here’s why as discussed in my August 2017 post:

Section 4 of the Amendment allows the Vice President, together with a “majority of either the principal officers of the executive departments or of such other body as Congress may by law provide”, to declare the President “unable to discharge the powers and duties of his office” by submitting a written declaration to the President pro tempore of the Senate and the Speaker of the House of Representatives. As with Section 3, the Vice President would become Acting President.

Section 4 is meant to be invoked should the President’s incapacitation prevent him from discharging his duties, but he is unable or unwilling to provide the written declaration called for by Section 3.

The President may resume exercising the Presidential duties by sending a written declaration to the President pro tempore and the Speaker of the House. But if the Vice President and Cabinet feel the president is still disabled, they can, in a sense, appeal to the House and Senate which has a short, set time frame to act. This section appears to possibly be a bit of a revolving door, but it would seem that if the president says he’s okay, the VP and Cabinet can appeal and the Congress finds in their favor, the matter would seem to be over and the VP becomes President.

So, if the Vice President and a majority of the Cabinet believe the President is unable to discharge the duties of the office, they submit a declaration to the Speaker and President Pro Tempore, and the President is relieved of duty and the VP becomes acting president.

When the president believes that he is once again able to discharge the duties of his office, he has only to submit his own declaration so stating to the speaker of the house and the president pro tem of the Senate.

Should the Vice President and a majority of the members of the Cabinet still believe the President is unable to perform, they may submit yet another declaration to the house and senate. If these bodies are not in session, they have 48 hours to assemble, and thereafter 21 days to decide the issue. If they fail to resolve the issue within 21 days, the duties of the president are restored. If both houses do not garner a two-thirds majority vote affirming the vice president’s declaration, the duties of the president are restored.

At a time when both houses of Congress and the White House are controlled by the same party it would seem highly unlikely that any such declaration of incapacity would be sustained. Even if it was sustained, the president need only submit a declaration stating that he is now able to fully discharge his duties to start this process all over again.

So at the most, the 25th Amendment merely provides a means by which a president can be relieved of duty, but not removed from office. By the very nature of the amendment such a suspension of duties is intended to be temporary.