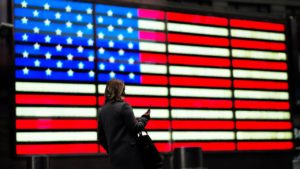 Millions of Americans are in despair. They know our democracy is in great peril — from plutocrats, organized groups using dark money to control Congress and ideologues determined to rip up Social Security, Medicare and much more. The law of the jungle is being imposed.

We can stop this. We can break the grip of powerful individuals on Congress and restore democracy of, by and for the people. But if we want to win, you and I must mobilize. A new approach, FiftyNifty.org, makes this not just possible, but actually easy.

How is any individual citizen supposed to impact a political decision-making process that largely takes place behind closed doors? The answer is obvious: Let your congressional representatives know what makes you angry.

Every member of the House is up for re-election in November 2018, and one-third of the Senate is too. In the past few weeks we have seen what happens when we confront our representatives in town hall meetings. They hide or run. They also start to get the message: Listen to us!

But in-person confrontation is hard to sustain. People have jobs, families and community obligations. Some Republicans already decline to hold genuine town halls. In these tense times, calling Congress is the best way to get your message across.

Yes, Congress has learned to dodge individual calls. But what if you are not the only one expressing a view? Imagine the impact if you can reach out to people you know throughout the country and convince them to together become a mighty chorus-by-phone. Now you have built your own campaign; even perhaps a crusade.

This might sound like a lot of work, but a new website created by Andy Lippman and his Viral Communications Group at MIT makes it quick, easy and actually fun to build effective pressure on Congress in exactly this way. FiftyNifty.org uses a game-like structure to encourage people not just to call their own senators and representatives, but also to persuade family and friends elsewhere in the country to do the same.

The website lets you see where in the country you have made connections and how many calls have been made. The maps you build and family-tree graphics that track your progress are very cool. (I am an adviser to this group, which is an MIT research project with very strong privacy and data protections. All the hard work is done by Andy, Leopold Mebazaa, Travis Rich and Jasmin Rubinovitz.)

First, phone calls send a valuable signal to members of Congress. Facebook comments are deleted, emails are ignored, and now we hear false claims that angry town halls were not attended by actual constituents. But congressional staffers still answer the phones — and they typically ask your name and address, primarily (and quite reasonably) to verify you are a constituent. According to a former congressional staffer:

“What representatives and staffers want to hear is the individual impact of your individual story.”

“I couldn’t listen to people’s stories for six to eight hours a day and not be profoundly impacted by them.”

These days many people do not like to make phone calls. But this is exactly what makes phone calls so valuable — it tells politicians how intensely you feel and how much you’re engaged about an issue. In fact, you should really call someone in Congress every day about an issue that matters to you. Concerted, consistent, polite pressure is best. You are signaling on what basis you will vote in just under two years.

Second, if members of Congress ignore the phone calls they receive, they will pay for this at the ballot box. Many Republican members of the House have relatively safe seats, but even they should fear the potential “wave election” that often happens two years after a presidential election.

Asking senators and representatives to act and then holding them accountable is entirely fair. In fact, it is precisely how this democracy was designed to operate.

Third, to win at FiftyNifty, you need to think about how people in other parts of the country view the issues of the day. Get out of your local comfort zone and ask every individual in your dispersed network: What do you care about? Mobilize your friends around what matters to them and in ways that make sense to you. Fight back against all forms of geographic polarization. (The name FiftyNifty comes from the classic song that helps children learn about our country.)

Andy Lippman has made four phone calls himself, all in Massachusetts. But he has inspired 88 phone calls in 17 other states. I’ve made two phone calls and encouraged other people to make a total of 78 calls across 11 states. (I’m currently in second place, behind Andy, according to the leaderboard. If you would like me to overtake him, please register using this link, which is specific to me.)

Fourth, FiftyNifty allows people in gerrymandered districts to have a say. You can only vote where you live, but you can talk to people anywhere.

And there are at least 4 million citizens — residents of the District of Columbia and US territories such as Puerto Rico — who have no voting representative in Congress. Residents of those places can either spend their time complaining or focus on connecting with folks who live somewhere that does have full congressional representation. Get your friends to make the call.

Fifth, we need to push back against the abuse of technology and automation in politics. The last 10 years have seen the rise of trolls (aiming to drown you out with noise and abuse) as well as bots (short for robots, i.e., fake personas) throughout the internet. Now we have algorithms being applied to developing hate messages on Facebook and other media. The extreme right has become very sophisticated in this space — including in the UK’s Brexit referendum last year, in Trump’s campaign and now in the French presidential election.

The best way to fight back is with real people making real phone calls. Artificial intelligence is getting smarter, but it cannot (yet) mimic a voter calling his or her representative with a personal message. Technological abuse is worse where the frictions are zero — meaning in purely electronic communication.

Phone calls involve real effort and that is the point. Take back democracy — from extremes and from the machines.

Make the phone call and mobilize your social network.