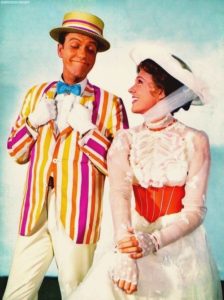 Like Julie Andrews sang in “Mary Poppins”, Just a spoonful of sugar helps the medicine go down . . . ” the Republican redoux of the Affordable Care Act will make health care much more affordable . . . for the wealthiest US citizens. According to an article in the New York Times this morning:

The provisions [in the AHCA] would repeal two tax increases on high earners enacted in 2010 to help pay for the Affordable Care Act: an increase in capital gains taxes and other investment-related income, and a surcharge on Medicare taxes.

People making $200,000 to $999,999 a year would also get sizable tax cuts. In total, the two provisions would cut taxes by about $274 billion during the coming decade, virtually all of it for people making at least $200,000, according to a separate assessment by the committee.

The ACA imposed taxes on insurers, pharmaceutical manufacturers and medical-device manufacturers, and imposed Medicare tax surcharges on Americans earning a quarter of a million dollars a year and more. The AHCA gets rid of them. The Joint Committee on Taxation estimates that the bill would cut taxes by almost $600 billion over 10 years. The Center on Budget and Policy Priorities notes that the AHCA’s repeal of Medicare taxes would give the 400 highest-earning American taxpayers a $7 million tax cut each.

So, if you’re wealthy, or at least making over $200,000 per year, you’re pretty much walking in tall cotton.

Pretty incredible for the party that casts itself as the champion of the “people,” the working class; that says that it wants to reduce the size of government, to get big government out of the lives of average citizens, to return choice over our lives to “us” and to allow states to operate independently, and for whom that message has resonated strongly among the poor, the working-poor and working-class. At every turn, Republicans continue to stick it to them. These same people eat it up and ask, like Oliver, “Please, sir. I want some more.” Their heros give it to them in spades.

Whether it is education secretary Betsy DeVoss, who would privatize education, implement charter schools, and make a free public education unattainable for the vast majority of US citizens, Scott Pruitt, the new head of the Environmental Protection Agency who would eliminate clean air and water regulations subjecting our lives to increased health risks, to Rick Perry, Secretary of Energy (who campaigned for president on a platform to eliminate that agency, although he forgot the agency’s name during a debate) who would open our national parks and our coastlines to drilling for oil, to Ben Carson and Tom Price and a host of other sycophants who are there solely to cater to the interests of big corporations and the wealthy, this administration has shown time and again that it only cares about top one percent of US citizens.

Okay, so what about premiums? How is the AHCA making health insurance affordable? The short answer is that unless you’re making $75,000 a year or more, it doesn’t.

Under the Republican plan people get tax credits which they can then use to pay premiums for health insurance. But what is a tax credit? According to Turbo Tax:

A tax credit is a dollar-for-dollar reduction of the income tax you owe. For example, if you owe $1,000 in federal taxes but are eligible for a $1,000 tax credit, your net liability drops to zero.

YAY! Right? Up to $4,000 relief from paying taxes! But not everyone pays taxes. The following table reflects the minimum income required to incur tax liability, according to Forbes:

If you are living at or under the poverty level, or if you aren’t but your deductions bring your taxable income to or below the taxable levels above (it’s called tax avoidance) and you aren’t paying taxes, what happens? Let’s say you own a small business, or are working out of your home. Your income pays for your overhead and living expenses, and you’re comfortable, but not by any means wealthy. Where’s the money to pay for health insurance premiums?

Just so you know, the federal poverty level in 2017 for the 48 contiguous states in a single person household is $12,060.

Arguably, they would be supplemented by “block grants” to the states under Medicaid. Under the ACA, Medicaid was expanded to cover more people and was allocated to the states who opted in, on the basis of the need of the state. Under Trumpcare, Medicaid block grants would be distributed equally among the states without attention to need. The poorest among us still get health care, they just get less of it. The Hill has a good discussion of the changes in the distribution of Medicaid money under ACA and AHCA.

The Kaiser Family Foundation has compiled an interactive map comparing ACA subsidies to the tax credits under AHCA. It’s pretty bleak. Even so, the lowest income compared on the map is $20,000 per year, even though, according to Kaiser,

On March 10, Vox published an article setting forth seven details in the AHCA that harm the poor. There are a couple of tables that are highly illustrative. First, what income levels benefit the most? According to Vox it’s those earning more than $40,000 per year, while those earning less are paying between $3,000 and $10,000 for premiums. 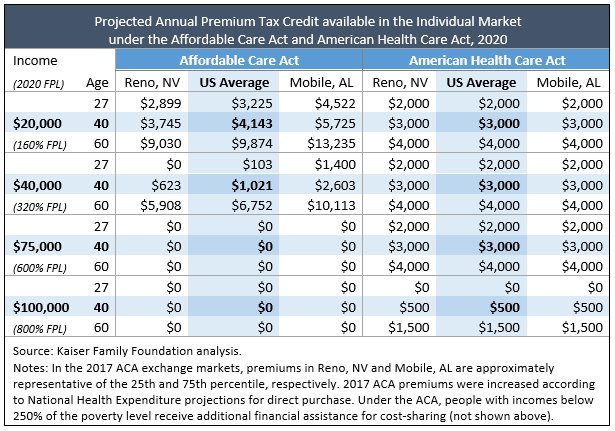 And what about those awful penalties for not having insurance under Obamacare? They’re not going away. In fact, they’re getting worse under Trumpcare for those earning less than $50,000 annually, as shown in this chart published by Vox. 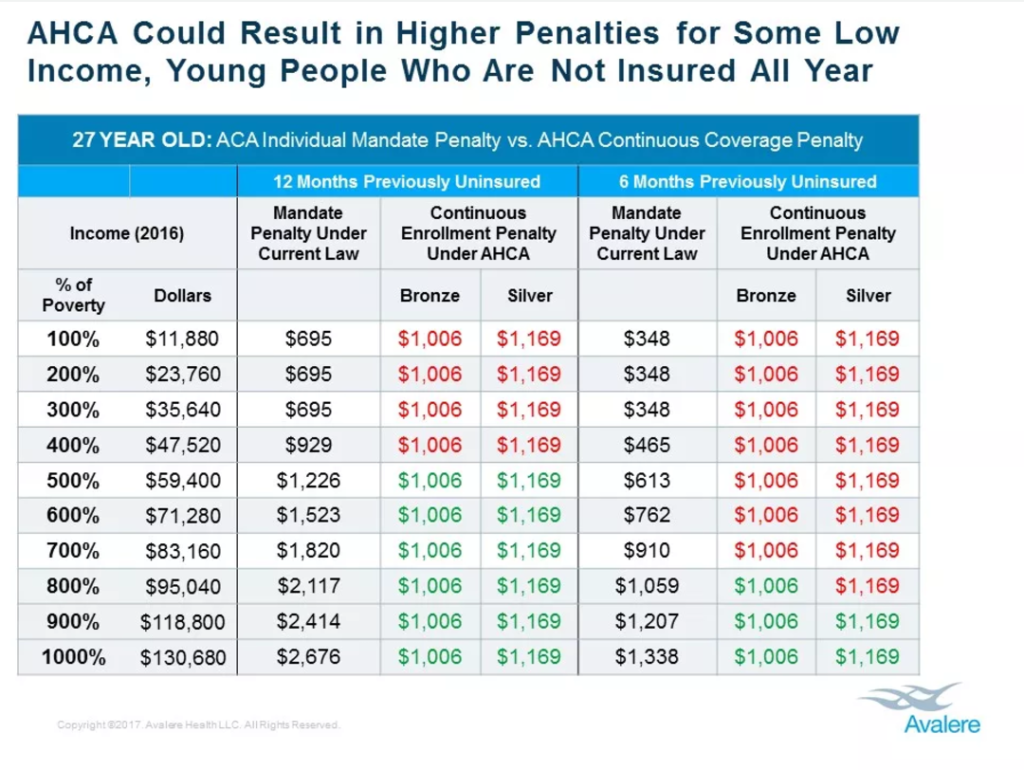 According to the New York Times,

The biggest losers under the change would be older Americans with low incomes who live in high-cost areas. Those are the people who benefited most from Obamacare.

There are income limits under the GOP bill. Those earning under $75,000 get the same, fixed amounts for their age groups as under the ACA — starting at $2,000 a year for those under age 30, increasing in $500 increments per decade in age, up to $4,000 a year for those 60 and older.the Republican plan’s tax credits are based on age, with older Americans getting more. (The plan, however, allows insurers to charge older Americans up to five times more than younger people.)

As for the cost-sharing subsidies available now under the ACA — which can lower out-of-pocket costs for copays and other expenses for those earning between 100% and 250% of the federal poverty level — those would be eliminated in 2020. However, the GOP bill sets up a Patient and State Stability Fund, with $100 billion in funding over nine years with state matching requirements, that can be used for various purposes, including lowering out-of-pocket costs of a state’s residents.

Just so you know, the federal poverty level in 2017 for the 48 contiguous states in a single person household is $12,060. You can see those guidelines by clicking the link above.

According to the USA Today article, under the Republican health care plan, no new Medicaid enrollment can occur after Dec. 31, 2019. States that have yet to opt in to the expansion by that date also will not be able to do so afterward. And there will be caps that states can receive per Medicaid enrollee.

I’m lucky. I worked for my employer long enough for my retirement to vest which meant that I was guaranteed medical coverage under my employer’s health care plan–for life. But I still have to pay for it. So far, cost of living increases in retirement payments have not kept up with increases in health care premiums. I’m hopeful that the latter will not surpass the former.

Next year, I’ll be forced into Medicare and my health insurance will become my secondary insurance plan. My Social Security statement already shows a decrease in monthly payments next year of more than $600. Assuming I live to 90 (I’m betting on 100), that’s an annual decrease of $7,200 and $180,000 over the next 25 years.

This is what has been brought upon us.

Next, I’ll look at other aspects of Trumpcare, including penalties for failure to maintain continuous coverage and contraceptive care.

Have a good weekend. And don’t get sick.