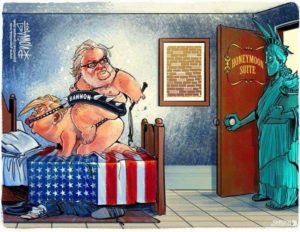 In what has become the height of absurdity, the Republican Party has decided there is no need to appoint a special prosecutor or to conduct further investigation of the Russian hacking of the United States’ election in 2016, because there is no evidence to support an investigation.

Oh, but excuse me, that wasn’t the height of absurdity. The height of absurdity was the Republicans’ race to investigate former President Obama based on a tweet by the Tweeter in Chief in a late-night rant that Obama ordered the wiretapping of his Trump Tower offices during the election. The Tangerine Tyrant won’t reveal how he came to this conclusion or from whence he obtained his facts. But facts don’t matter to the Tangerine Tyrant.

. . . if the investigation goes forward and shows that former President Obama engaged in no wrongdoing, the Tweeter in Chief may very well find himself facing allegations of using his political office to harass and intimidate a political opponent a la Richard Nixon.

You see, Republicans don’t want to investigate the Russian hacking of the elections notwithstanding the fact that 17 intelligence agencies, according to The New York Times, found “strong evidence” that not only did the Russians hack into the United States elections but that they did so in an attempt to sway the vote in favor of Donald Trump.

How could this be, you ask? Isn’t it important that a hostile national government hacked into our national election system and attempted to sway the outcome of the election? Well of course it is. The Republicans are parsing words. Their refusal to appoint a special prosecutor or to engage in any further investigations of the Russian hack are based upon their assertion that there are no discernible facts that would show that the election was affected by the hack.

This is the Tangerine Tyrant’s egomaniacal tendencies at their highest. He just can’t stand the fact that somebody might have helped him win the election or have influenced people to vote in his favor. You see, the Tyrant has to do it all himself. The people love him. And he only lost the general election because 3 million* illegal immigrants all voted for Hillary Clinton. Bull pucky!

The very purpose of an investigation is to determine whether someone who makes a claim is telling the truth. PERIOD. First, you conduct an interview of the person who is making the claim, ask relevant questions to find out the supporting facts and whether there are any witnesses who can support the claim and then to follow those leads down, which includes the interviewing of witnesses or others who may have information relevant to the claim.

On the claim of Russian hacking with the intent to affect our presidential election, we “only” have the word of 17 intelligence agencies coming to the conclusion that it did in fact happen. That in and of itself should spawn the appointment of a special prosecutor. Add to that the disclosure by several Trump campaign operatives, and that of the Attorney General himself that they met with Russian officials during the campaign when they were surrogates to that camp, the gun is not only smoking, it still has rounds in the chamber.

Now, on the Tangerine Tyrant’s claim that Obama wiretapped his offices, all we have to support this claim is a freaking tweet. Most people think the “information” came either from an article by right wing radio host Mark Levin or from a headline on Breitbart, or both. But we don’t know because the Tweeter in Chief won’t tell us. But this claim, we have to investigate. Fully. Give me a break!

But you know what? If the Republicans want to investigate this “claim,” let’s have at it! But let’s also investigate the the Russian hack of the investigation. Regardless of whether the hack influenced the outcome of the election it is still an egregious violation of our national security.

I actually have a feeling that this whole Obama wiretap nonsense will backfire on the Tangerine Tyrant and his administration. First, if the investigation goes forward and shows that former President Obama engaged in no wrongdoing, the Tweeter in Chief may very well find himself facing allegations of using his political office to harass and intimidate a political opponent a la Richard Nixon.

I have actually heard some pundits who are familiar with the Justice Department, the workings of the FISA court and the workings of the various intelligence agencies postulate that if there was a wiretap, it may very well have been in conjunction with the Russian hacking allegations and that the FISA court may very well have issued a warrant authorizing the wiretap. Wouldn’t that be a hoot? Direct evidence of Russia hacking into Trump’s computers and/or a cozy relationship between the inner workings of the Tweeter in Chief’s campaign staff and the Russian government!

This could end up being far better than a Saturday Night Live skit.