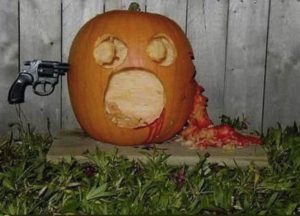 As of today both the House and the Senate have passed legislation repealing  a regulation enacted in the waning days of the Obama administration saying that people who had applied for Social Security disability benefits because of a mental condition, and whose condition makes them incapable of managing their own finances, should be referred to the FBI background check system and prevented from buying guns. These actions effectively make it easier for people with certain mental conditions to purchase firearms.

The Washington Post published an opinion piece by Paul Waldman, a contributor to The Plum Line blog, and a senior writer at The American Prospect, stating the legislation “only” affects about 75,000 people–not all people with mental illnesses, according to the wording of the Obama regulation.

Jeffrey Swanson, a Professor in Psychiatry and Behavioral Sciences at Duke University School of Medicine, who has extensively researched and written on the issue of mental illness and gun violence, states in an opinion piece in The Washington Post that the ban based on mental illness was not supported by the evidence and was way too broad.

Dr. Swanson has also published a study on this topic in the U.S. National Institutes of Health’s National Library of Medicine, where he summarizes his results as follows:

Epidemiologic studies show that the large majority of people with serious mental illnesses are never violent. However, mental illness is strongly associated with increased risk of suicide, which accounts for over half of US firearms–related fatalities.

I have a long history with guns. I grew up on a farm and ranch in south central Oklahoma. I got a BB gun when I was around 5 years old. Every Thanksgiving morning my Granddad, Dad and I would go quail hunting on the farm. I walked about 20 feet ahead of Dad and Granddad and when the quail flushed, I hit the ground. Around 9 or 10 I was given a very nice 22 rifle. It had a six bullet magazine. I got really good at killing jack rabbits. We were overrun with them and our hired hand skinned and ate every one that I brought in.

I didn’t get another gun until I was City Attorney in Stillwater, Oklahoma. When the Police Department upgraded their sidearms, the Chief offered me one of the newer S&W single action .38s for $150 and I got it.

I get guns. I like guns. I know how to use them and greatly respect them. I once had a client who was a veteran who owned an AK-47 knock off. Sadly, he liked to clean it when he was drinking and one night he discharged the weapon through the floor of his apartment, passing within four feet of his downstairs neighbor’s head before exiting the side wall into the parking lot, bouncing off a metal support pillar and then off the fender of a pickup parked outside. Luckily no one was hurt. After he got arrested, that was the last he saw of that gun. Thankfully.

Through all the tragedies: Aurora, Sandyhook, Newtown, Charleston, Bakersfield, Orlando (and many others), the debate has centered around controlling gun purchases by the mentally ill. It is a vicious “chicken-and-egg” cycle of tail chasing. Orlando seems to have changed the discourse. Following Orlando the arguments seemed to be focused on hate crimes verses terrorism and once again, we seem to be chasing our tails. What difference does it make? In virtually all of these killings, whether they were committed by someone who was insane, angry, a suspected terrorist or a bigot, many if not most of the shooters came by their weapons legally or stole them from someone who got them legally.

And the whole mental health argument makes my head spin. To get on the blocked list, a judge must first rule that a person is “mentally ill.” This generally happens after someone has committed a crime, or has been the subject of a mental health hold, and after having the right to obtain counsel and a hearing (due process) is adjudged mentally ill. So, it’s hard to get on that list.

Arguably, we should actually want people to actively seek out therapy to help them address mental health issues, and we should want them to be able to do so without fear of being reported to the authorities and placed on a “list.” We should not want to impose on mental health professionals the burden of “self-reporting” their patients. (Currently, in California, the only time a therapist has a duty to report a patient to the authorities is when the patient exhibits a “clear and present” danger to himself or others. That seems fair.)

So, it becomes pretty clear that if we take: anger, mental illness, terrorism, bigotry (and every other variable out of the equation), there is only one thing left: the guns. So why isn’t our conversation about the guns? Because it’s all about money and politics. The NRA has bought our politicians. The US couldn’t even pass a universal background check bill supported by more than 90 percent of the public (including the overwhelming majority of gun owners) after 20 elementary school children were massacred at their school.

But here is my “solution.” I’m going to put it simply, even though it is not a simple solution, but it is a starting point and one our ever diminishing group of liberals and progressives (and I’m not talking about the neoliberal elite) should pick up and run with. It needs fine tuning and work, but here it is:

The Supreme Court has said that the possession of a gun for protection of the home was a legitimate interest and protected under the 2nd Amendment. The Supreme Court stopped short of saying that anyone had a right to possess any kind of weapon he or she wanted. The Court has also held that both the State and Federal Governments have a right to impose reasonable restrictions on the purchase of weapons. So:

1. Certain types of weapons should be declared illegal. That means it would be illegal to own, sell, or possess these types of weapons. Think military style weapons, the kinds of weapons that go beyond personal protection or the weekend hunter. This can sometimes be difficult to get a handle on, but we can do it if we try.

2. Ammunition, clips, and accessories for these types of weapons should be outlawed as well making it illegal to possess, own, or sell them.

3. It should be illegal for gun stores to own, possess or sell these weapons and ammunition, and they should be open to civil and criminal penalties if they do and especially if someone is injured or killed by one of these weapons or ammunition purchased at their store.

5. Everyone must pass a background check. The process must be expanded and the internet and gun show loopholes must be closed. It should never be easier for someone to purchase a gun than it is to get a drivers license.

6. Fund weapons buy-back programs so people can turn in their weapons for cash, no-questions-asked.

By effectively making these weapons and ammunition, etc., contraband it allows law enforcement officials to seize them, get them off the streets and either reassign them, where practical to law enforcement, or to melt them down. Where serial numbers exist which can be traced, gun shop owners and manufacturers must be held civilly and criminally responsible–and I’m not just talking about the companies, I’m talking about the people in charge of those companies. There should be strict liability for the sale of these weapons. Just like not knowing the person the bartender served a cocktail was underage is no defense to serving liquor to minors, gun sellers must be held strictly responsible for the consequences of their actions.

It is only by strengthening the process by which guns can be purchased, banning military style weapons, and holding the sellers of these weapons (which includes manufacturers) civilly and criminally responsible that we will make a dent in the gun violence we are experiencing today.