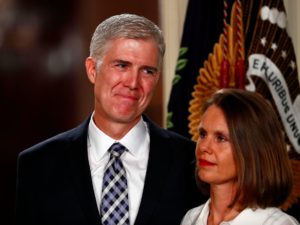 On March 20, 2017, the Senate Judiciary Committee commenced hearings on the nomination of Neil Gorsuch to the Supreme Court. This is a long, drawn-out process that will most likely take a couple of weeks to complete–especially with all the procedural wrangling that is expected to take place among members of the Senate.

The New York Times published a good piece explaining the confirmation process generally, but what I want to look at in some detail–especially because it has been largely bandied about in the press and by the Tangerine Tyrant and his henchman, Mitch McConnell–is the, BUM! BUM! BUM!, “NUCLEAR OPTION.”

What is the Nuclear Option?

Over the last few weeks, we’ve been hearing a lot about the nuclear option in the media, but there is never any explanation as to what exactly it is and what it means to the process of selecting a Supreme Court justice, but we are left with a very clear impression that whatever it’s effect, it is serious and far-reaching.

This last weekend I decided to delve into the issue to see what I could find out about it and why everyone is talking about it. In a nutshell, Wikipedia defines the nuclear option as:

“. . . a parliamentary procedure that allows the U.S. Senate to override a rule or precedent by a simple majority of 51 votes, instead of by a supermajority of 60 votes.”

Ok, pretty straight-forward, right? Well, no. Like most things procedural in the Senate, it can get pretty complex. Let’s try to untangle things.

My first question was, “What’s the big deal? If you change a rule, you can always change it back later, right?” Apparently, not so much. Let’s unwind this a bit.

The primary purpose of the “nuclear option” is to allow the Senate to more easily stop debate on an issue by lowering the number of votes required to end debate vis-a-vis cloture.

Before we can understand how the nuclear option works, we need to understand a little bit about how the Senate itself works and what is required for its members to vote on matters before it. First, let’s look at how many votes are required for the Senate to pass matters that are under consideration before that chamber.

Where did we get the idea, then, that 60 votes in the Senate were required in order to appoint a Supreme Court Justice?

How many votes does it take to pass matters in the Senate?

It takes 51 votes, a simple majority, to pass legislation. It takes a 2/3 vote (67) to  approve treaties and to amend the Senate Rules. (There are other matters which also require a 2/3 vote which are not relevant here.) It takes a 3/5 vote (60) to end debate. Note: This assumes that all 100 seats in the Senate are full and the members have been duly sworn in, i.e., have taken their oaths of office.

Article II, Section 2 of the United States Constitution, contains the “appointments clause” which establishes in the President the authority to enter into treaties and to make appointments with the “advice and consent” of the Senate:

That semi-colon at the end of the phrase, “He shall have Power, by and with the Advice and Consent of the Senate, to make Treaties, provided two thirds of the Senators present concur;” is important. Scholars contend that the 2/3s requirement in that section therefore only applies to the ratification of treaties, leaving the confirmation of presidential appointees to a simple majority pursuant to the  U.S. Constitution, Article 1, Section 5, paragraph 2, which says, “Each House may determine the rules of its proceedings . . .”

The filibuster is a neat little procedural trick that allows the minority party in the Senate a chance to block legislation and presidential appointees even if they do not have sufficient numbers to oppose that legislation or appointment on a straight up or down vote.

Ending Debate on the Floor of the Senate

There are 3 ways that debate on the floor of the Senate can come to a close:

The usual way, when debate is lengthy, is by cloture. The Senate has no time limits on debate on any particular matter. Every Senator has a right to speak as long as he or she wishes on a matter, but only once; however, the Senate can call for an end to debate. The process is called cloture. The process for a cloture vote is set forth in Senate Rule XXII:

In case you didn’t read all of that, in essence it says that 16 members of the Senate may file a motion to end debate which must be approved by a 3/5 vote (60 members) of the Senate. If the motion is for amendment of the Senate Rules a 2/3 vote (67) is required. If the cloture vote passes, debate is ended and the matter under discussion is moved to a vote of the Senate.

The filibuster in modern times has most frequently been used to block presidential appointments to cabinet positions and to the judiciary. (The President appoints federal judges for the District and Circuit Courts of Appeal, as well as to the U.S. Supreme Court.)

The filibuster is a neat little procedural trick that allows the minority party in the Senate a chance to block legislation and presidential appointees even if they do not have sufficient numbers to oppose that legislation or appointment on a straight up or down vote. The filibuster allows a minority of 41 senators to stall, and potentially to stop, the enactment of legislation or the appointment of an individual with whom they disagree.

Keith Hennessey, who spent 14 years in Washington, DC advising a President and two Senators on a wide range of economic policy issues, explains how filibusters work in his blog.

Essentially, a Senator is recognized by the Presiding Officer, stands to speak–and doesn’t stop. He or she can go on as long as he or she wants, but there are a few rules, like:

“the vote on cloture, under Rule XXII of the Standing Rules of the Senate for all nominees other than for Supreme Court, is by majority vote in the Senate.”

Indeed, a threat from the majority party to invoke the nuclear option has been successfully used to get the minority party to agree to let some presidential appointments through.

Here’s How the Utilizing the Nuclear Option Works, Procedurally.

If 60 members vote in favor of cloture, all debate ceases and the matter moves before the full Senate for a vote.

By November of 2013, Republican resistance to the appointment of Obama nominees had reached an apex. At that time 59 executive branch nominees and 17 judicial nominees were waiting for confirmation.

In frustration, and in order to move the nominations forward, then Senate president pro tem, Harry Reid, entertained a point of order ruling that “the vote on cloture, under Rule XXII of the Standing Rules of the Senate for all nominees other than for Supreme Court, is by majority vote in the Senate.” And thus, the nuclear option had been exercised. Under Senate rules, motions on a point of order need only a majority vote to pass.

This rule, to allow a cloture vote by simple majority, now applies to all lower court nominees and to more than 1,100 executive branch appointees, according to the New York Times.

The Neil Gorsuch nomination and the nuclear option.

Immediately following the Senate’s action in 2013, then Senate Minority Leader Mitch McConnell was reported in the New York Times as saying,

“You think this is in the best interest of the United States Senate and the American people?” asked the Republican leader, Senator Mitch McConnell, sounding incredulous.

“I say to my friends on the other side of the aisle, you’ll regret this. And you may regret it a lot sooner than you think,” he added.

Today, I don’t think that any Democrats would argue with Mr. McConnell’s sentiments; but will he accede to the President’s urgings and “go nuclear”?

According to an article in Wikipedia entitled “Nuclear Option,”

“Prior to November 21, 2013, in the entire history of the nation there had been only 168 cloture motions filed (or reconsidered) with regard to nominations. Nearly half of them (82) had been during the Obama Administration, [64] but those cloture motions were often filed merely to speed things along, rather than in response to any filibuster.[65]

Primarily, the nuclear option has been a threat used by the majority party to bring the minority party into line so that its business could be conducted in a timely manner. Once implemented, it becomes a matter of Senate precedence which can only be accomplished by a vote of the Senate on another point of order.

Why can’t they just change it back?

Think about it. Filibuster rules benefit the minority party in the Senate, but if the minority becomes too boisterous, the majority can try to control them in various ways, one of which is threatening to change the rules for ending filibuster by decreasing the number of votes required to end debate–the nuclear option. Once the rules are changed, they become a matter of precedent in the Senate and remain in force until changed.

Why wouldn’t you want to change them? The rules allow the Senate to amend their rules by majority vote at the beginning of each session. Why not just do it then? One word: POWER.

It takes a majority of Senators to change the rules. Under the current makeup of the Senate, the balance of power is 52 Republican, 46 Democrats and 2 Independents who caucus with the Democrats. To effect change, all 46 Democrats, plus the 2 Independents and 3 Republicans would need to vote together to effectuate such a change.

The filibuster is a pain in the side of the majority party. Why would they want to magnanimously hand such a tool back to the minority once the minority (when it was in power) gave it up? They wouldn’t.

Will they or won’t they use the Nuclear Option?

We will find out in a few days. Democrats have to decide if they want to risk Republicans going nuclear this early in the Tyrant’s term with the possibility that other Supreme Court appointments may come up for consideration and losing their ability to filibuster.

I don’t like Gorsuch or his political leanings, but I’m not sure he’s worth the risk of the nuclear option being exercised. Put on a show, put up a fight and let it go to an up-or-down vote. Live to fight another day. Besides, not all nominees turn out the way people think they will. But that is another post for another day.