After losing the majority of Governorships, the majority of state legislatures, the House of Representatives, the US Senate and the White House, here is a list of the lessons the Democratic Party has learned following the 2016 election: 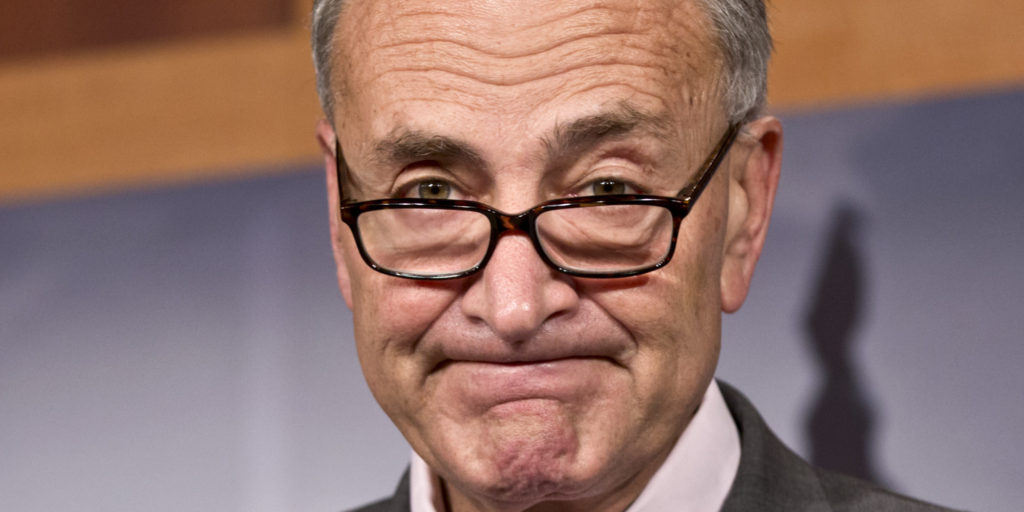 In the 9 months since losing an election that the vast majority of the US thought they had won, exactly what has the Democratic Party learned? Apparently, nothing.

In an attempt to forge ahead, turn new soil, and begin anew, the United States House of Representatives reelected Nancy Pelosi as its minority leader, and the United States Senate elected Chuck Schumer as its minority leader. Following that, the Democratic National Committee rejected progressive candidates in favor of an Obama anointed successor, Tom Price to lead that organization. It is no wonder that dark clouds have been following the Democratic Party ever since.

As an independent voter who leans Democrat, I have been waiting to see what the Democratic Party will come up with in the way of a message and a messenger. So far, nada. So when Chuck Schumer gave a speech on the “new” direction for the Democratic Party, it was a hopeful moment. But he fell woefully short.

Instead of a broad, sweeping agenda full of ideals and programs aimed at lifting up all of America, regardless of race, socioeconomic status, gender, gender identity, sexual orientation, sex, whether you are blue-collar, white-collar, or no caller, they announced a “plan,” aimed at white middle-class Americans. Trump supporters, essentially.

Idiots. The Democratic party calls me from time to time to ask for donations. I hang up on them. I no longer give to the Democratic Party. I give to individual candidates who have enumerated platforms that support lifting us all up and making the country better:

And the Democrats have been incredibly incompetent at naming or appointing a messenger, which is incredibly troubling.

Yesterday, Bill Moyers columnist  IAN HANEY LÓPEZ penned an op-ed entitled “Everything That’s Wrong with the Democratic ‘Reboot’ in One Lousy Op-Ed.” I happen to agree with what he wrote, so I am reposting it here. I hope you “enjoy” it.

But what should be a welcome shift is instead emblematic of everything that’s wrong with how the Democratic Party is seeking to remake itself.

1. A party of swamp creatures. Schumer himself is deeply tied to Wall Street — and he makes no mention of breaking up the power of concentrated wealth on the street, or in the boardrooms of the biggest corporations. Why should we believe a party lead by him and people like him, tied to and financed by megadonors, will really fight for people and against corporate power?

2. A party on a new marketing kick. Schumer boldly proclaims that “Democrats will show the country that we’re the party on the side of working people — and that we stand for three simple things.” Great! Can’t wait. What will they be? Economic justice, equality and dignity for all, and caring for the planet? No, just economic policies tied to wages, sick leave and drug prices. Don’t get me wrong: these are welcome policies all. But what about the sorts of things that help “working people” as real people — who need human rights, who require a healthy environment? Sorry, somehow these did not make the cut in a new effort to “rebrand” the Democratic Party as focused with laser-like precision on pocketbook issues.

3. A party afraid of equality. It’s no accident Schumer avoids talking about human rights. The Democratic Party leadership is convinced it must win back the “white working class” — and convinced too that any mention of equality tied to race, gender, sexual orientation, physical ability or religion is just one big turnoff to white men. Let Trump repeatedly demonize the MAJORITY of this country; in their new plan, Democrats will ignore this so they can appeal to some small fraction of Trump voters. Why should people fighting for their human rights turn out for Schumer’s Democratic Party?

4. A boring party with limited ambitions. The bulk of Schumer’s op-ed focuses on small policy changes that would help working people, while also promising more dinky policy proposals to come — but then concludes that the Democrats lack the power to actually enact any of this. So let me understand: Trump threatens our economy, government, democracy, planet and global peace, and Democrats respond with small-bore policy talks focused on what they cannot achieve? No wonder people stay home from the polls.

It doesn’t have to be this way.

We need a Democratic Party that fights for all of us, and recognizes that the biggest threat in our lives comes from concentrated wealth and runaway corporate power over the economy, government and our political parties. Yes, the Democratic Party must resolve to put its own house in order.

We demand a Democratic Party that stands for human rights for all. And that fights against divide-and-conquer politics, showing the “white working class” that they have much more to fear from the greedy rich than from those of us the right loves to trash.

We insist on a Democratic Party that cares about the world we live in today and the planet we will leave our children. Nothing else matters if the climate collapses.