Remember the “birtherism movement” going back many years? Claiming that Obama, a black man of mixed heritage whose mother was born in Kenya, was not entitled to be president because he could not prove that he was born in the United States. That wasn’t about qualifications. It was about — race. Even after President Obama produced a certified copy of his Hawaiian birth certificate, Trump didn’t let up. Remember when Trump questioned Ted Cruz’s qualifications on the same basis? That one died away rather quickly, one must assume, because Ted Cruz is caucasian.

When David Duke, former Grand Master of the Ku Klux Klan, endorsed him for president, Trump first disavowed any knowledge of who Duke was or as to whether he knew Duke was a white supremacist. Even though he was called on by many people to denounce Duke and to reject his endorsement, Trump refused to do so for many days until the pressure became too great and in a week pronouncement rejected the endorsement with what amounted to a wink and a nod. 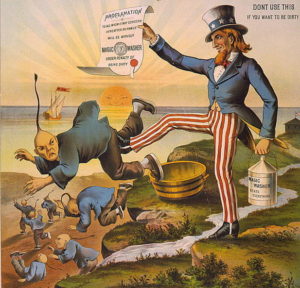 One of his first acts as president was to sign an executive order banning Muslims from 7 countries from entering the United States, while at the same time lessening travel restrictions for Christians coming from those same countries. It is worthy to note that citizens of none of those 7 countries have been held responsible for any terrorist attack on the United States.

Thankfully the courts overturned this unconstitutional order, and while the administration allegedly continues to work on a ban which will pass legal muster, there is still not a ban in place. Thankfully.

One of the primary tenets of his campaign was that he was going to build a wall along the border with Mexico and that Mexico was going to pay for it. He accused Mexico of sending all of its worst citizens: drug dealers, rapists, and thugs to the United States. Now that Mexico has flatly declared that it will under no circumstances pay for this wall, Trump threatens to shut down the United States government unless Congress includes funding for the wall in its debt limit negotiations. Thankfully, both Speaker Ryan and President Pro Tem Mitchell have declared that is not going to happen.

He is currently formulating a plan to end DACA, the program implemented by Pres. Obama which allows those who were illegally brought into this country by their parents when they were minors to stay.

Immediately following the race riot in Charlottesville, Virginia, the country was quick to call out the violent actions of the white supremacists, all right neo-Nazis who flocked to the streets to protest the removal of a statue to Confederate Gen. Robert E Lee. Instead of wholeheartedly condemning the actions of the neo-Nazis, Trump placed blame on both sides and at one time said there were many good people, “on both sides.”

Even though he has tried to paint himself, in carefully scripted speeches read from a teleprompter, as a president who cares deeply about unifying the country who will not tolerate that type of violence promulgated by white supremacists, at a campaign rally in Phoenix, Arizona he left the teleprompter and went on a 75 minute tirade underscoring his ambivalence toward those very same groups and engaged in campaign-style rhetoric geared toward stirring up the base.

And let’s not forget for a moment that he also included alt-right people on his staff like the now ousted Steve Bannon, Stephen Miller, and Sebastian Gorka, who was fired on Friday evening.

And on Friday night, in the throes of the worst hurricane to hit the United States in over a decade, Trump uses his presidential power not to send out the National Guard to assist victims of the disaster, but to pardon Maricopa County Sheriff Joe Arpaio who had been convicted of contempt of court by the United States federal court for violating an order directing him to cease detaining suspects on the basis of race and racial profiling.

An article published yesterday in the New York Times, stated:

In a two-paragraph statement, the White House said that Mr. Arpaio gave “years of admirable service to our nation” and called him a “worthy candidate for a presidential pardon.”

Yeah. He’s an American patriot if you think a bigoted racist sheriff who was elected to enforce the law and to protect and to serve all people, who believes he is above the law, a patriot. Apparently, the president does.

This weekend here in San Francisco, the alt right white supremacist group Patriot Prayer has planned to hold rallies across the Bay Area. Some of those rallies have allegedly either been canceled or moved to the other, smaller venues. Violence is certain to ensue regardless.

He can’t help himself because he is what he is: a racist and a bigot. Nothing more and nothing less and it cannot be tolerated.

But let’s not let him off the hook just yet because it doesn’t end there, not by a long shot. As I pointed out in a previous post:

First, he came for the Muslims, then he came after women and their reproductive rights, then it was the middle class, the working poor, and the poor. Then, he came after our children by attacking public education. Now he is targeting transgendered men and women, and now all of us in the LGBTQ community.

Let’s be unequivocally clear about this:

This man is dangerous and he must stopped!

Unfortunately, the party out of power (that would be the Democrats) has neither a clue nor plan for taking back the government. Recently Democratic Congressional “leaders” rallied around a podium behind a banner claiming in all capital letters “A BETTER PLAN.”

Wait. What? Seriously? A better plan? Wouldn’t anything other than this idiot in the White House be a better plan? Seriously, folks. Hire a freaking ad agency. Kindergarten kids could do better.

And exactly what is this better plan? Do they know? I don’t think they’ve told us if they have one what it is. Oh no wait. We still haven’t gotten over the last election. Hillary just put her pity party book out and of course they’re still blaming the Russians.

Holy crap, Batman! These folks better put their big boy and girl pants on pretty darn quickly. 2017 is almost over and the midterm elections are upon us. As dark as it may seem right now, the political sun is shining out there and those who have planted the right crops could reap political change. But I really don’t see the political wherewithal or any popular movement happening at the present time.

In the face of all this feckless leadership, it is going to once again be up to the people to make change happen.

I left the Democratic Party in April 2016, becoming an independent. I no longer give to the Democratic party, I give to individual candidates who seem to carry the kind of message this country needs in order to move forward. I encourage you to do the same. Together we can make change happen because it’s certainly not going to come about based on the efforts of the people in the political establishment.

This neo-Nazi fascist white supremacist bull crap has no place in this country. Racism, intolerance, bigotry and misogyny have no home here and those who would foment those movements must be quashed. We must let it be known whether through direct confrontation or peaceful intervention such conduct has no place in the American fiber.

Like everything else, this starts at the top. This starts in the oval office, but unfortunately the occupant of that office has taken a different turn. We must do everything we can to limit his power by turning out in droves to the midterm elections and electing representatives and senators who will not tolerate either this behavior or the direction he and his administration are taking this country.