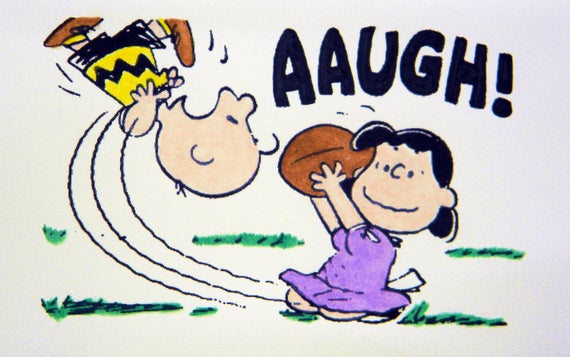 It’s fourth and long, the 11th hour, the bottom of the ninth and yet we still don’t know if Friday will be the final day of the impeachment trial of President Donald John Trump. If I were a betting man, and I would rather handout dollar bills on the sidewalk in Las Vegas than drop quarters in a one armed bandit, I would bet that Friday it is over.

All week McConnell has teased us with a vote count for calling or blocking witnesses. Most pundits seem to agree that his public declaration on Wednesday that he lacked votes to block witnesses was a ploy to put pressure on Republican senators who had not yet committed to the party line. Since then the narrative has gone back and forth.

I can’t help but remember the Charles Schultz cartoon, Peanuts, and its annual fall strip where Lucy promised to hold the football so that Charlie Brown could kick it, only to pull it away at the last minute causing poor Charlie Brown to fall on his ass musing that he couldn’t believe he fell for that ploy again.

Over the last two days of question and answer, nothing new has been gleaned and I would surmise that no senators have been persuaded off their original positions.

So here we go. By the of the day on Friday the world will see a corrupt president vanquished along party lines by Republican senators who would rather protect their seats than fulfill their constitutional duty to act as fair and impartial jurors. But this is no surprise, and we really should not recoil in disgust. This is nothing more than a self fulfilling prophecy. The president’s close allies have not hidden their disdain for the process or their desire to protect a president who could severely adversely affect their ability to remain in office should they buck him publicly.

I will not be surprised by a failure to convict. I’m not sure how I will feel. Angry? Saddened? Disgusted? Resigned? Determined? I don’t know. I do know and strongly feel that this is a new low point in our national history, one of constitutional proportions.

Where do we go from here?

Primarily, lawmakers need to stop governing with fear, fear that if they move to constrict presidential power it may adversely affect them when they are in power. Lawmakers must think in terms of the country, in terms of our constitutional form of government and of the checks and balances envisioned by our founders. Remember, we are in the place because Congress has been too quick to abdicate their authority and to defer it to the executive branch. Failure to legislate is an abdication of constitutional authority. Everyone has forgotten that it’s supposed to be country over party.

First, we head to the ballot box and no matter who gets the Democratic nomination for president, we vote for that person, even if we have to hold our noses. We simply cannot afford four more years of Trump, not if we expect to have a democracy left.

Second, the Congress must enact new ethical standards for the office of the presidency. What this president has shown is that the old norms do not apply. Standards of decency and transparency have been thrown out the window. We must hold the president to the same ethical standards as members of his cabinet. We must require public disclosure of at least 10 years of tax returns and financial records. We must outlaw nepotism and the appointment of family to high-ranking positions in the administration.

Third, the office of Special Counsel must be reestablished and rules must be formulated and codified to govern the impeachment of high-ranking government officials

Fifth, the Senate must immediately reestablish the filibuster for consideration of appointments to the United States Supreme Court as well as to the lower courts and cabinet officials. We have seen what has happened since the Senate abolished the filibuster for these positions. This president has appointed more than 150 conservative justices to both the lower federal courts as well as two justices on the United States Supreme Court. His cabinet appointees have been abysmal and would never have been approved had the filibuster been in place.

If you can, help defeat Lindsay Graham, Devin Nunes, Mitch McConnell and others who have been standardbearers for this administration. If you are in a state where a Republican senators up for reelection, please get out and work for their opponent! Help take back the Senate! And if you are in a house district with a close race, please go out and support your Democratic candidate so that we can protect our majority in the house.

If you think this president cannot be reelected, you are sorely mistaken. And although I disagree strongly with the way the House of Representatives went about their impeachment process, there are still many grounds for impeachment that currently exist: violation of the emoluments clause and 10 counts of obstruction of justice that are set forth in Volume II of the Mueller Report. And, the way this president operates, there are likely to be even more grounds for impeachment that arise between now and the election. Let’s not forget that the day after Robert Mueller testified before Congress, Trump asked the president of Ukraine to gather dirt on a political rival to assist him in the 2020 election.

So, tomorrow after the votes are tallied, the requests for additional witnesses and documents are denied, and a vote for acquittal is upheld, we should all lose ourselves in the Super Bowl over the weekend and then, on Monday be prepared to take to the streets, to register voters, to get out the vote, and

NO MATTER WHO, VOTE BLUE!