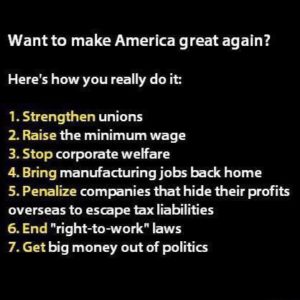 Even in light of the prospect of a 1.9 percent pay increase (whoopee) for federal employees, morale is low. It is not surprising in light of some of the other draconian steps regarding their wages, hours, and working conditions currently under consideration by their “bosses” in Congress. Here are a few reasons, reported in an article this morning in the Washington Post.

This is how corporate US institutions treat employees. Cut hours, cut pay, demand more work while maintaining customer service. One example that comes to mind is the regional bank–the largest in the county I grew up in. When Obamacare was passed, a loophole in employer-provided health benefits allowed employers to exempt part-time employees from the employer’s health care plans. What did the bank do? It immediately reduced most non-executive employees to part-time status.

He, like most of his fellow civil-service employees, had a mission: to make the lives of those he served better.

An old friend of mine, a retired major general in the Army National Guard, used to joke that federal employees were like the early missile systems: “Don’t work. Can’t fire ’em.” To be sure, in any workforce you will find slackers–those not performing up to standards. In the federal employment system, as in the majority of government systems on the local and state levels, you will find a civil service system which is designed to protect employee rights which typically govern wages, hours and working conditions.

These civil-service systems, akin to labor unions, prevent employers from discharging workers other than for “just cause.” These just cause requirements protect civil employees from being hired and fired at the whim of elected officials. It enables our government to function on a long-term basis, granting employees the security to serve their city, county, state, or nation without fear that the next elected official will sweep them out and replace them with their political cronies.

I have proudly served in the public sector for many years of my professional life: as a city attorney, as an assistant attorney general, and as an investigator of police misconduct for the city and County of San Francisco. My father, a farmer and rancher back in Oklahoma, served with the agricultural research service, an arm of the soil conservation service in the US Department of Agriculture, for about 20 years. It provided him enough income to keep the farm going during those times until he retired. It wasn’t easy work. A part of their mission was to assist farmers and ranchers and making sure that their land didn’t float away under heavy rain. On stormy nights he would get in his car, drive to the office and then drive to the nearest creek where he would hang from a gondola dropping various instruments into the rushing water to gauge temperature, speed, and sediment levels–all in the pouring rain and while dodging lightning bolts. He, like most of his fellow civil-service employees, had a mission: to make the lives of those he served better.

This Republican-controlled government has completely lost sight of service to the public that elected them to their jobs, to their cushy lifetime pensions, to their government-subsidized healthcare, and to their lifetime salaries.

So, the next time you get an email from a left-wing group asking you to sign a petition to oppose this right wing, brown boot authoritarian nationalistic propaganda, sign the damned petition. Go to the resource section of this blog where you can find the telephone numbers for your elected representatives on the local, state, and national levels and call them to voice your displeasure what is happening in our country.