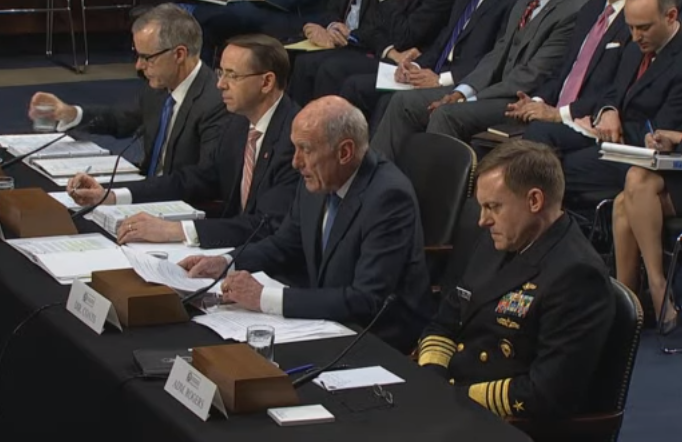 On Wednesday, June 7, the Senate Intelligence Committee held a hearing into the ongoing probe into allegations that Russia interfered with the 2016 presidential election and whether there was collusion between the Russian Government and the Trump campaign. Before the committee sat John McCabe, Acting Attorney General, Rob Rosenstein, Deputy Attorney General, Dan Coats, Director of National Intelligence, and Adm. Mike Rogers, Director of the National Security Agency.

All four men repeatedly refused to answer simple questions regarding conversations either with the president or with former FBI Director James Comey. Several senators let their evasiveness slide, that is until Senator Angus King (I-MA) got his turn.

Visibly upset with the panel, Sen. King pressed each of the panel members, asking why they refused to answer these simple questions.

Were they asserting a privilege? Answer “no.”

Had executive privilege been asserted by the president? Answer “no.”

Was the subject matter of the conversation classified? Answer “no.”

When pressed further, all four men stated that they either did not feel or did not believe they should answer the question and open hearing, acknowledging that the special prosecutor, Robert Mueller, had not instructed them not to respond to such questions. And there seemed to be a vague suggestion that the administration may seek to impose the executive privilege on such matters.

What was abundantly clear was that there existed no justification or rationale as to why these men should not respond to the questions asked. CNBC reports,

Asked by Maine independent Sen. Angus King why he would not answer a direct question about the alleged Trump conversation, Rogers said simply, “I feel it is inappropriate, Senator.”

King, frustrated, fired back: “What you feel isn’t relevant, Admiral.”
….
Coats said: “I’m not sure I have a legal basis. But I am more than willing to sit before this committee during its investigative process in a closed session and answer your questions.”

It wasn’t the content of the conversations King was after; it was simply the existence of them.
According to Politico,

Senators pointed out how simple it would have been for Coats and Rogers to deny the substance of the news reports suggesting Trump asked them to downplay or interfere in the FBI’s probe. Instead, both men said they’d tell lawmakers as much as possible behind closed doors, and were still waiting for an indication from the White House about whether the president might invoke executive privilege.

Later in the hearing, Politico reported, Coats indicated his concerns about discussing his conversations with Trump were due to Mueller’s (the special prosecutor’s) investigation.

Eventually, the Director of National Intelligence acknowledged there was no legal ground on which he was declining to discuss his conversation.

We citizens call that stonewalling or blowing smoke or maybe even circling the wagons.

Then, on Wednesday evening, Comey released his 7-page opening statement chronicling his conversations with the president, as reported in the New York Times. 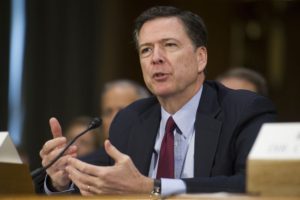 I watched a decent chunk of the hearing while riding the elliptical bike at the gym. Comey’s testimony was solid. He was direct, straight forward and earnest. When he was asked about the existence of tape recordings of his conversations with the president, he responded, according to NPR, “Lordy, I hope there are tapes!” eliciting laughter, and adding that he had no problem with the tapes being released and made public.

In recalling the now infamous January 27 impromptu invitation to dine with the president at the White House (the one during which the president allegedly asked whether Comey wanted to keep his job and repeatedly asked for his loyalty), Comey stated that he had to break a date with his wife to attend, and that in retrospect, wished he hadn’t.

Also telling was the fact that Comey used the word “lie” in referring to comments made by the president. I practiced law for more than 35 years and I can tell you that lawyers go to great lengths not to use that word even when the lie is flagrant.

Almost immediately following the hearing, according to the New York Times, Trump’s personal lawyer, Marc Kasowitz, attacked the testimony–and Comey personally–and utilizing a timeline, which has since been confirmed to have been inaccurate, claimed that Comey actually leaked the memoranda to the press inappropriately.

Today, during a White House press conference in the Rose Garden, the president called Comey a liar and offered to himself testify on the matters under oath.

Folks, there simply isn’t this much smoke where there’s no fire. Sorry. Clearly, the administration and its officials are circling the wagons to protect the president and his administration. What will be interesting to see is when the flames become more evident, who will stay around to come to his rescue, and how many rats will jump ship.

It brings to mind former San Francisco Supervisor Kevin Shelley, whose father was a former mayor, and who was elected to serve as California’s Secretary of State. Complaints over his questionable campaign fund-raising, alleged misuse of federal voting funds and admittedly volcanic temper resulting in abuse of staff members, led to his resignation from office. Not one of his staffers came to his aid.

As the temperature rises in the administration, just exactly how loyal will his appointees remain? Will White House senior staffers continue their attempts to quell the tempest, or simply let it blow itself out?

When we see the life boats being lowered, we’ll know.