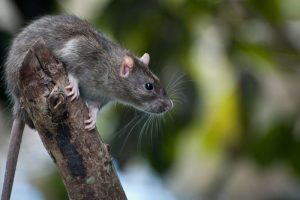 Apparently, lots of people. I was not one of them, however. Not until about 3 months ago when I noticed the bark disappearing off the trunk and limbs of my lemon tree in the backyard. The ground around the tree was covered in small gnawed bits of bark. It was not until closer inspection that I noticed rat droppings mixed in that I became alarmed. But what to do?

My next-door neighbor has a beautiful plum tree that produces a bounty of black plums every spring. I bumped into her on the street one day and casually asked if she was having a rat problem? “Oh my God, yes!” We quickly agreed that we would work together to resolve this problem, but what to do? Her

husband had heard of an abatement program through the city and he was working on getting some information about that. And there it sat for about a week. The problem seemed to abate itself, the damage stopped, and we were lulled into a sense that the problem had somehow resolved itself. And then it started up again.

I have lived in my house for 15 years (the tree is more than 40 years old) and I have never seen this problem so I was in a quandary until I googled “rats are eating the bark off my lemon tree.” Lo and behold, it’s a real problem!

But where was it coming from? What was the cause? And why, all of a sudden, was I seeing this huge rat infestation?

Then I started thinking (usually not an altogether good thing). City crews had been working on the sewer lines in the cross street at the end of our block for about 6 months. They had begun to work on the sewers on my street in the last couple of weeks. I suddenly realized that the emergence of the rats appeared to be tied to the work on the sewers. If this situation were truly caused by the actions of the city, then, I thought, the city should help fix the problem.

I went online to SF311.org, located the rat abatement division of the city’s health department and I submitted an email request for abatement. I got an email back within a day or two with a ticket number at a promise of action. A couple of days later, I received a voicemail from an abatement officer who had visited my neighborhood, noticed rat droppings around the manhole covers, and having witnessed the work on the sewers promised some sort of action.

Mom suggested I get a BB gun. Apparently she has not seen my blog posts about guns.

“Perfect!” I thought to myself. This thing is going to get resolved. I called the abatement officer back and left him a voicemail stating that I wish he had rung my doorbell because I could have showed him the damage the rats were causing in my backyard. About a week later I got a return call from the same abatement officer. He assured me that he would have the city set rat traps in the sewer manholes and drains in the neighborhood. I offered to allow him to view the damage that was being caused to my trees if he wanted to come out and see it. And this is where the train left the tracks.

He asked if I was the property owner, to which I replied “yes.”

“In that case,” he replied “if I come to your house and see evidence of a rat infestation I will have to cite you for a violation of the health code, which will require that you abate the problem.” To say that my jaw hit the floor is an understatement. (I presume that if I had answered that I was a tenant in the property, he would have suggested that he come and cite the property owner and require him or her to abate the problem.)

I was reminded of the old tongue-in-cheek saying, “Hello. We’re from the government. We are here to help.”

I thanked him for the information and concluded my conversation politely. I dutifully informed my next-door neighbor who was similarly astounded by the city’s response. But the question remained, what to do?

You can imagine that, living in a city, where everyone’s backyards adjoin each other this could easily be a problem with no simple or easy solution. (I am recalling stories of the Black Plague in Europe which wiped out upwards of 60% of the population, and experiencing shortness of breath.) “God I hope they don’t get into the house!” And although I’m not particularly religious, I felt I needed all the help I could get.

Poisoning the buggers was completely out of the question. Poisoned rats die in inconvenient places where they can be eaten by other animals which then become poisoned and die. Both my neighbor and I have dogs. Traps are similarly out of the question as, although the rats would not have been poisoned, they would just become ensnared doggie treats, and while our dogs have all their shots, I am not particularly enamored of the idea of them snacking on rat carcasses.

It turns out there are ways to resolve the issue.

Mom suggested I get a BB gun. Apparently she has not seen my blog posts about guns.

But the solution I like the best is one offered by the Hungry Owl Project in Marin County: hosting a barn owl nest in the neighborhood. According to the project, “a single Barn Owl family can consume up to 3,000 rodents in a 4 month breeding cycle, nesting boxes can be a win-win scenario for property owners and owls alike.” And they’re kinda cute. 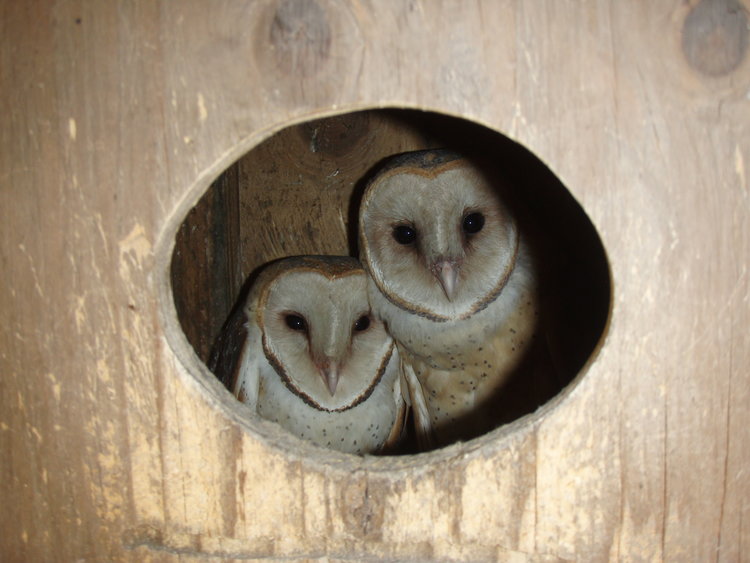 So the phone calls start on Monday morning. I have a list of arborists. I have the phone numbers for several pest control companies. I am hopeful we do not have to have too many chefs in this kitchen at one time. And I’m gonna call the folks in Marin to see if we qualify for an owl box. I’ll even drive up to get it if I need to.