Yup, “Many months have come and gone since I wandered from my home in those Oklahoma Hills where I was born,” like the country bard Hank Thompson once sang back in 1969. (Click the link to hear the song if you’re not familiar with it. It’s a real toe-tapper!)

I am looking forward to this trip, actually. I was last there over the Thanksgiving holiday last year. Since dad died 6 years ago, I have tried to make it back to farm and ranch 3 or 4 times a year.

In the 34 years that I have been away from Oklahoma, I have learned to avoid visiting during the months of January and especially February to avoid the snow and cold, and during August to avoid being boiled to death under the blistering sun. I have also learned that you never connect through Salt Lake City or Denver in the winter or through DFW in Dallas in the summertime to avoid thunderstorms and heavy cross winds.

I have also come to realize that I am not the same person who left there 34 years ago, nor is it the same place that I left behind.

Growing up, Oklahoma was always a solidly blue state. Neighbors got along. Religion had more to do with the way you lived your life than telling other folks how they should live theirs. Voting was a fairly simple matter. The polling attendant would hand you a really flimsy piece of paper that looked like it would fall apart if you held it too tightly, with the names of all the candidates printed neatly in 2 columns, Democrats on the left, Republicans on the right. Above the names of the Democratic candidates was a picture of a rooster. If you wanted to vote a straight Democratic ticket, you would ink up your rubber X and simply stamp the rooster. I can’t remember what the animal was on the Republican side because, frankly, I never looked at it, I never read the names of the Republican candidates, and I certainly never ever voted Republican! No good Okie did.

Life on the farm and ranch wasn’t really hard. It wasn’t always easy, either. It could get really busy, involve very strenuous work with long hours, and you could get really dirty and really tired. In the morning there was always a big breakfast. At noon was our big meal of the day. We called it dinner. Meatloaf, fried chicken, beef steaks, potato salad, coleslaw and dessert were not uncommon. In the evenings we had supper which usually consisted of sandwiches or something light. Farm folks there still take their meals in the same way. There is something almost romantic about it.

Every day there were morning and evening chores between which was sandwiched the main work of the day: irrigating the row crops, plowing fields, mowing and raking alfalfa hay, or building fences were a few of the everyday tasks, and of course there were lots of other things. 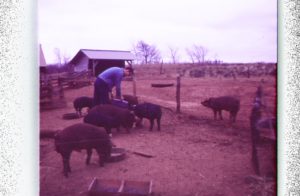 As early as junior high school I had my own herd of pigs for whom I was the primary caretaker. Dad was a firm believer that you feed first what feeds you so the pigs always ate before I did, and so did any other livestock that didn’t reside in the pastures. (Dad was a cattle rancher. The pigs were strictly my thing.)

My grandmother raised chickens. Every day she would gather the eggs and on special occasions she would wring a neck and prepare a big meal. She, granddad, and I tended a fairly large garden consisting of beefsteak tomatoes, corn, green onions, yellow onions, peppers, radishes, cucumbers, squash, potatoes, watermelon, green peas, and of course, okra. Grandmother did a lot of canning. Granddad had the best sausage recipe I have ever known and unfortunately it died with him.

I was a pretty lucky kid growing up. In the early days, dad held a job with the federal government from 8 to 5 but mom was always home. My paternal grandparents lived less than a quarter mile away from our house so I saw them as much as I did my parents. Believe me, there was no lack of supervision! On a typical summer morning dad would give me my marching orders for the day. I would hop in our old 1948 Willis Jeep that had gunnysacks for seat covers and drive the quarter-mile to the grandparents house along the side of the highway. You see, I was only about 12 or 13 years old so I wasn’t allowed to drive on the highway. 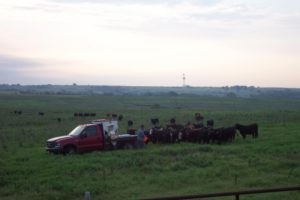 I would get started with my work for the day and would typically get additional, different instructions from my granddad. When I would stop mid-morning for a drink of water at the house, grandmother would give yet other instructions leading me at one point to sit them all down. “I can work for one of you, but not all of you. You guys need to figure this out.” And they did.

Bill’s filling station, tucked into a gentle curve of Highway 62 halfway between our house and granddad’s had a little country store. You could stop in for a cigar, a Coke or a cold Jax beer, some minnows for your next fishing trip, or you could pick up a half gallon of milk and a loaf bread on your way home like we did on most days. I clearly remember the round sticker on the butt of a loaf of white Wonder Bread proclaiming its price–only 5 cents–and dad grunting, “There’s not a nickel’s worth of wheat in that entire loaf!” Bill’s family lived in back of the store. He would run a tab for you and collect at the end of the month or whenever you could pay him. He would even let me snag a Coke here and there. It went on the tab, of course.

There were long days sitting alone by yourself on the tractor. Alone with your thoughts or singing at the top of your lungs trying to drown out the drone of the tractor. There was also time to play in the creeks, swing from the trees, and skinny dip in the neighbor’s pond. I learned a lot in those years. I learned about the rewards of hard work, self-reliance and sacrifice and the satisfaction of a good day’s work.

The work never ended. There was always something else to do. And sometimes it seemed like you were spinning your wheels. Our family took maybe 2 vacations in my lifetime. One day, in the evening when it was time to head to the house for supper I turned to my dad, “How you do it?” I asked, “it never seems like we get finished. Doesn’t that get you down?” I was probably 15 at the time. Dad just looked at me and smiled and said, “At the end of the day I stand up here on the hill and I look out over the farm. I think about all the things that I did today and I say to myself, ‘You worked hard today. You did everything you could do. We’ll pick it up here tomorrow.'”

It’s a lesson I’ve never forgotten and have applied frequently in my adult life. Simple lessons standing on a hillside talking to your dad before supper.