Donald Trump built his business brand on gold ensconced skyscrapers bearing his name in 40 foot tall gold letters. He puts his brand on everything he touches–some successfully and some not so much.

When he threw his hat into the political arena, the brand changed. The man who used to be a Democrat and who sounded almost liberal at times was locked in a closet. What emerged was the man we have today, serving in the highest office in the land, sitting in the oval office. But is this a “new” Donald Trump, or just the “old” Trump emboldened by more power than he could have ever imagined?

The evidence for Trump’s racism has long been overwhelming. His real estate company violated the Fair Housing Act. He fueled his political rise with toxic birtherism.

On the night of April 19, 1989, Trisha Meili, a 28-year-old investment banker, was attacked, beaten, raped while jogging in Central Park. Her injuries left her in a coma which lasted 12 days. On the night of the attack, five juvenile males—four black and one of Hispanic descent—were apprehended in connection with a number of attacks in Central Park committed by around 30 teenage perpetrators. They became known as the Central Park Five.

They were all tried, and ultimately convicted of the crimes even though their DNA did not match that which was left on the victim. The defendants spent between 6 and 13 years in prison.

In 2001, convicted serial rapist and murderer Matias Reyes was already serving a life sentence for other crimes, but he was not at that point a suspect in the Central Park attack on Meili. Reyes met Wise in an upstate New York prison, the Auburn Correctional Facility.[43][55]In 2002, Reyes declared that he was 17 years old on the night of April 19, 1989 when he assaulted and raped the jogger. He said that he had acted alone.[56][57] At the time of the attack, he was working at an East Harlem bodega on Third Avenue and 102nd Street, and living in a van on the street.[57][58] He provided a detailed account of the attack, details of which were corroborated by other evidence.[26] The DNA evidence confirmed his participation in the rape, identifying him as the sole contributor of the semen found in and on the victim “to a factor of one in 6,000,000,000 people”.[26]

Reyes’s confession, plus DNA evidence confirming his participation in the rape, led the district attorney’s office to recommend vacating the convictions of the defendants originally found guilty and sentenced to prison. Supporters of the five defendants again claimed that their confessions had been coerced by police. An examination of the inconsistencies between their confessions led the prosecutor to question the veracity of their confessions.

Based on Reyes’ confession, the DNA evidence, and the unreliable nature of the confessions, District Attorney Morgenthau recommended that the convictions be vacated and on December 19, 2002, New York Supreme Court Justice Charles J. Tejada agreed.

So where does Trump come into play? 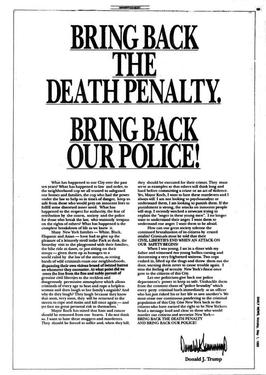 On May 1, 1989,  Trump called for the return of the death penalty when he took out full-page advertisements in all four of the city’s major newspapers. Trump said he wanted the ”criminals of every age” who were accused of beating and raping a jogger in Central Park 12 days earlier ”to be afraid.”[80] The advertisement, which cost an estimated $85,000,[80] said, in part, “Mayor Koch has stated that hate and rancor should be removed from our hearts. I do not think so. I want to hate these muggers and murderers. They should be forced to suffer … Yes, Mayor Koch, I want to hate these murderers and I always will. … How can our great society tolerate the continued brutalization of its citizens by crazed misfits? Criminals must be told that their CIVIL LIBERTIES END WHEN AN ATTACK ON OUR SAFETY BEGINS!” [81] In a 1989 interview with CNN, Trump said to Larry King: “The problem with our society is the victim has absolutely no rights and the criminal has unbelievable rights” and that “maybe hate is what we need if we’re gonna get something done.”[82]

Trump’s xenophobia began to emerge almost immediately during his campaign for the presidency with his call for a “big, beautiful wall” along the United States’ southern border with Mexico which he ludicrously said that Mexico would pay for (but people bought it). He called Mexicans “rapists” and “drug dealers”, “although I’m sure there are some very fine people.”

Next, he promised to “humanely” round up and deport 11,000,000 undocumented people living in the United States. Notwithstanding that many, if not most, were law abiding residents, gainfully employed and paying taxes.

Then, David Duke, former Ku Klux Klan Grand Dragon endorsed him for president. First he claimed he didn’t know who Duke was, and then several weeks later, in a watered-down statement refuted the endorsement.

But he’s not done. In June 2016, Trump challenged the impartiality of the judge who was presiding over the Trump University lawsuit on the basis that the judge was “Mexican.” The judges parents were immigrants. The judge was born in the United States. But, I guess if you are impugning the character of people from Mexico, promising to build a wall to keep them out and to deport 11,000,000 undocumented residents, in Trump’s mind there could be cause for worry. After all, his disdain for the judicial system and the rule of law he has made well-known.

Next, he proclaimed that under his regime–er, presidency–he would immediately ban the immigration of all Muslims until the government could figure out “what the hell is going on.” It was one of the first things he did upon becoming president. The courts have struck down three attempts at this ban.

According to an article in the Washington Post published October 18, 2017, here are the countries currently in the ban.

Countries affected by the travel ban: 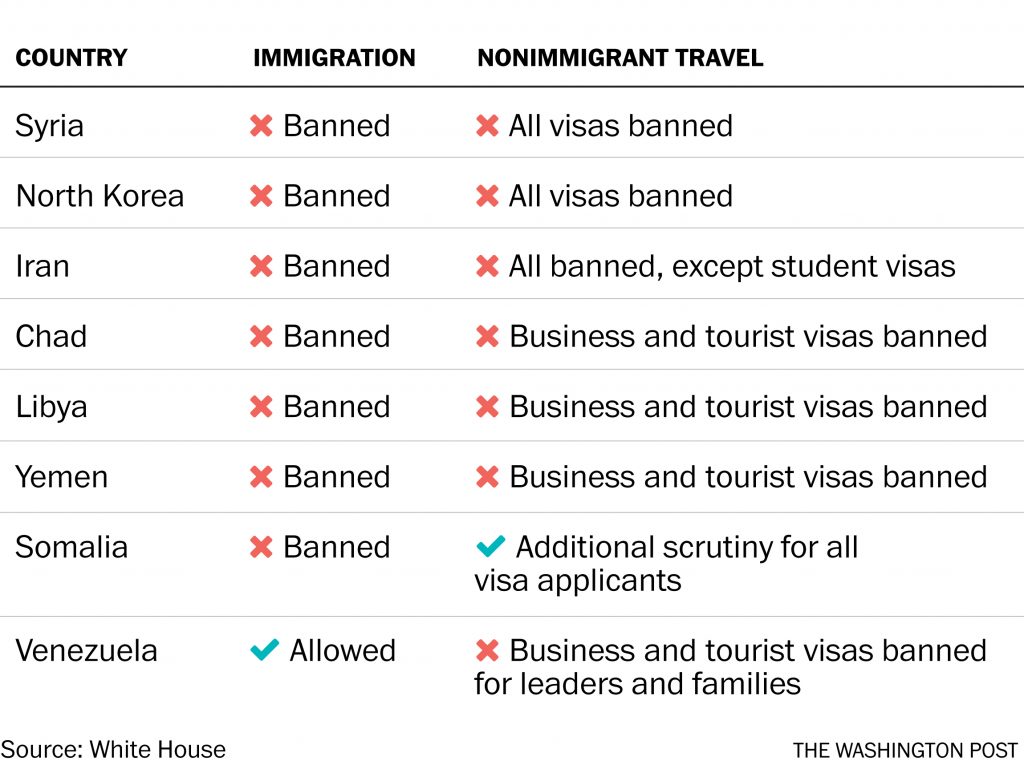 The Unite the Right rally (also known as the Charlottesville rally) was a far-right rally in Charlottesville, Virginia, United States, from August 11–12, 2017.[4][5] Its stated goal was to oppose the removal of a statue of Robert E. Lee from Emancipation Park.[6][7]Protesters included white supremacists, white nationalists, neo-Confederates, Klansmen, neo-Nazis, and various militias. Some of the marchers chanted racist and antisemitic slogans, carried semi-automatic rifles, swastikas, Confederate battle flags, anti-Muslim and antisemitic banners, and “Trump/Pence” signs.[7][8][9]

The rally occurred amidst the backdrop of controversy generated by the removal of Confederate monuments throughout the country in response to the Charleston church shooting in 2015.[10]  [Background, Wikipedia.]

Three people died and 34 were injured. Two law enforcement officers died when their helicopter crashed, and one protester, Heather Heyer, died after being run down in the street by a car driven by one of the alt-right protesters, who also injured 19 other people.

After the protest, the president famously responded that there were “some very fine people” on both sides.

Let’s not forget that in September when NFL quarterback Colin Kaepernik, who has an interracial heritage, began taking a knee during the playing of the National Anthem in solidarity with the Black Lives Matter Movement. The president lambasted him and other black players saying,

“Wouldn’t you love to see one of these NFL owners, when somebody disrespects our flag, to say, ‘Get that son of a bitch off the field right now. Out! He’s fired. He’s fired!”

at a political rally in support of Alabama Senatorial candidate Luther Strange.

Just last December it was reported by Axios that during a June 2016 Oval Office meeting discussing immigration:

Trump called Afghanistan a terrorist haven, claimed that the 15,000 Haitians who had travelled to the U.S. “all have AIDS,” and said that the 40,000 Nigerians would never “go back to their huts” after seeing the U.S., officials who had been in the room told Times reporters NYT’s Michael D. Shear and Julie Hirschfeld Davis.

And just this week, the president retorted to a bipartisan group of Senators and Representatives who were gathered to discuss a deal on immigration, “Why are we having all these people from shithole countries come here?” referencing specifically Haiti and African countries and then going on to suggest that the United States should let in more people from Norway. You know, the blond-haired, blue-eyed folks that Hitler much preferred to the brown-haired, dark-eyed people he was sending to incineration camps. Blond-haired people like jogger Trisha Meili.

In addition to his call for deportation of 11,000,000 residents, he has rescinded protections for DACA recipients, Hatians, and Salvadoreans, all–not surprisingly–non-whites.

Numbers of TPS immigrants by country: 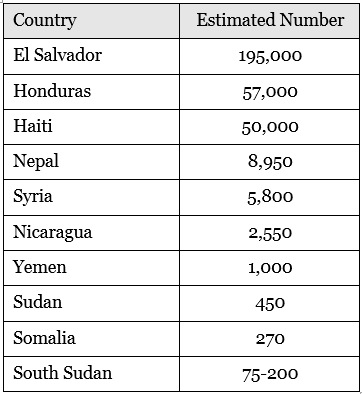 Supporting documentation in the highlighted links.

The White House hasn’t really denied the comments, or has said that the comments pertained to the living conditions in those countries and not the people living there. Republican lawmakers have been slow to criticize, if at all.

Trump was allegedly making a “victory lap” after making the comments calling people to see how they thought it played. In fact, Business Insider reported this week that many White House insiders believed the remarks would actually play well with the president’s base.

Let that sink in.

. . . they predicted that Trump’s base will be receptive to the comments in the same way they were when the president repeatedly attacked NFL players who knelt for the national anthem, according to CNN.

James Downie in an opinion piece in the Washington Post, on January 11, “Now can we call the president a white supremacist?” thinks so. For all the reasons I’ve set forth above and more.