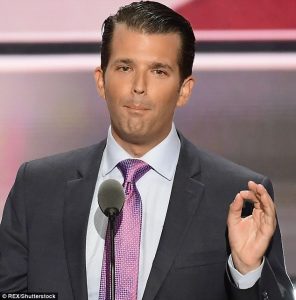 In one of the four versions of his meeting with the Russian attorney which were offered by Junior, according to the Washington Post and others, he stated :

“After pleasantries were exchanged, the woman stated that she had information that individuals connected to Russia were funding the Democratic National Committee and supporting Mrs. Clinton. Her statements were vague, ambiguous and made no sense. No details or supporting information was provided or even offered. It quickly became clear that she had no meaningful information.”

It has been reported that Kushner left the meeting after only 10 minutes and that Manafort spent the meeting fidgeting with his phone but did not leave the meeting.

Just exactly how long does it take to leave a dossier in your chair or to drop a flash drive on the floor? If you are fearful that your conversation may be recorded, it would be prudent to discuss everything but the intended subject matter of the meeting during that meeting. I am not a conspiracy theorist, I am a realist. I am not swayed by the attorneys denials of her connection with the Kremlin, in fact it is exactly what I would have expected from someone under such circumstances.

What amazes me is that neither the media nor concerned politicians have raised such a suspicion. Given the secrecy surrounding this administration, and the drip, drip, drip of information related to the Russian connection, there is much more to come.